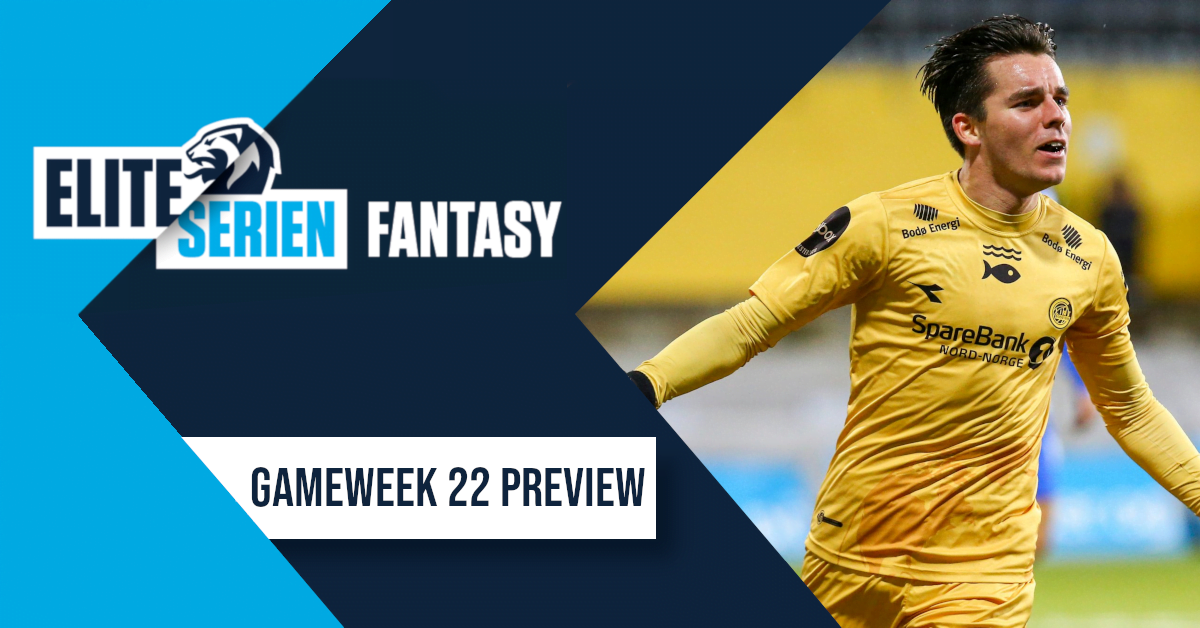 Amahl Pellegrino has been one of the most consistent players in Eliteserien Fantasy this season, and even though his injury absence is a massive loss for both fantasy managers as well as FK Bodø/Glimt’s title hopes, tipster Jacob Silkstone is backing Hugo Vetlesen to come up big in his absence.

One of those weeks in which most things went right, only for the captain choice to go badly wrong. Milan Jevtović had plenty of chances to score as Odd dominated Jerv, but squandered every single one. Our differential attacking pick, Adama Diomande, performed slightly better before leaving the pitch early with what looks like a serious injury. Amahl Pellegrino, the most captained player in the game, was another injury casualty as Bodø/Glimt were eventually brushed aside 4-1 by a Molde team now seemingly destined to be champions. Pellegrino’s injury status will be a key talking point ahead of Gameweek 22, with many teams eyeing up Vålerenga’s in-form Osame Sahraoui as a potential replacement at a slightly cheaper price point. Sahraoui’s 18-point haul was the standout success for our Team of the Week, with Casper Tengstedt, the other significant contributor to a total of 67 points. With the overall gameweek average down at 34, that makes GW21 one of our most successful weeks of the season so far. Will our luck (combined with at least a smattering of good judgement?) hold as we head into a new round of fixtures?

Aalesund have two clean sheets from their last five games at home and haven’t conceded more than twice in front of their own fans all season. Sten Grytebust (5.1M) ranks fourth in the league for total saves, while opponents Sarpsborg have lost six consecutive away games. The numbers have to add up, don’t they?

Popular pick Martin Linnes is back in training ahead of Molde’s game with Jerv, but the safer selection right now seems to be Kristoffer Haugen (available for a Trent-esque 7.7M). Haugen’s attacking stats have been impressive all season long, and he leads all other defenders for expected assists.

Strange but true: Vetle Winger Drasgnes (6.0M) has blanked in eight of the last ten gameweeks. In that time, his ownership has nearly doubled, and his price has risen by 0.5M. Lillestrøm remain one of the tighest defences in the league, especially at home, and opponents Strømsgodset have blanked in three of their last four away games.

Bargain option Kobe Hernandez-Foster (4.3M) has been a revelation since securing his starting spot for HamKam. Rock-solid at the back, he also has two attacking returns in his last three games, and should have had at least one more last gameweek in a painful defeat against Sarpsborg. Facing Viking would have been an uncomfortable prospect for any defender earlier in the season, but the Stavanger side haven’t quite been the same since selling Veton Berisha. HamKam have generally been solid at home, conceding just four times in their last five (including visits from both Molde and Bodø/Glimt).

With concerns over Wolff Eikrem’s minutes and Fofana struggling with illness, Ola Brynhildsen (10.1M) comes into our thinking as we look for a way into Molde’s attack. Brynhildsen was among the most-selected Molde players at the beginning of the season, but a long-term injury has led to him completing the full ninety minutes just twice. Although he’s played under 180 minutes since his return, he already has four goals and three fantasy bonus points, and he’ll be targeting a strong end to a heavily-disrupted campaign.

Hugo Vetlesen (9.1M) has finally shown signs of hitting top form after a slow start to the campaign, registering five goals and three assists in his last five games. Bodø/Glimt must win their northern derby against Tromsø to have any hope of clawing back a sizeable deficit in the title race, and Vetlesen is now the main man in midfield in the likely absence of Pellegrino.

Lillestrøm’s Yllden Ibrahimaj (7.4M) is in the top ten of active players for expected assists, but has only delivered an attacking return in two of his last ten matches. It’s not a huge surprise, then, that his ownership is hovering around the 5% mark, but the underlying numbers are promising, and he’s our differential midfield selection this week.

Markus Kaasa (5.7M) was the star of Molde’s emphatic win over Bodø/Glimt last gameweek, following that up with another lively performance in the Europa Conference League against Gent. He looks fantastic value right now as Molde aim to continue their march towards the title.

For the third consecutive week, we present a differential striker with below 1% overall ownership. Sahraoui will be most people’s route into the impressive Vålerenga attack, but he’s missed a couple of training sessions this week, and his minutes (at the time of writing) are uncertain. Instead, we turn to Torgeir Børven (9.0M), a recent arrival from the Turkish Süper Lig. Børven will be fondly remembered by Eliteserien Fantasy managers for his free-scoring spell at Odd, and registered his first goal for his new club last weekend.

Casper Tengstedt (9.9M) has made the sort of start at his new club that might even make Haaland jealous. After five games, he now has seven goals and four assists. That level of performance can’t possibly be sustained, but we’re happy to keep on riding the wave here: Haugesund’s defence is far from watertight.

We predicted that Viking might be a little battle-weary as they prepared to face Rosenborg last week, and they were duly thumped 4-1 in Trondheim. Having failed to deal with a Danish striker in GW21, the Viking defence should perhaps be worried about history repeating itself as they prepare to face Victor Lind (5.5M). Lind is something of a left-field selection here, with overall ownership of just 0.3%, but we’re backing him to be a good differential for anyone with room for a punt.

Team of the Week Gameweek 22 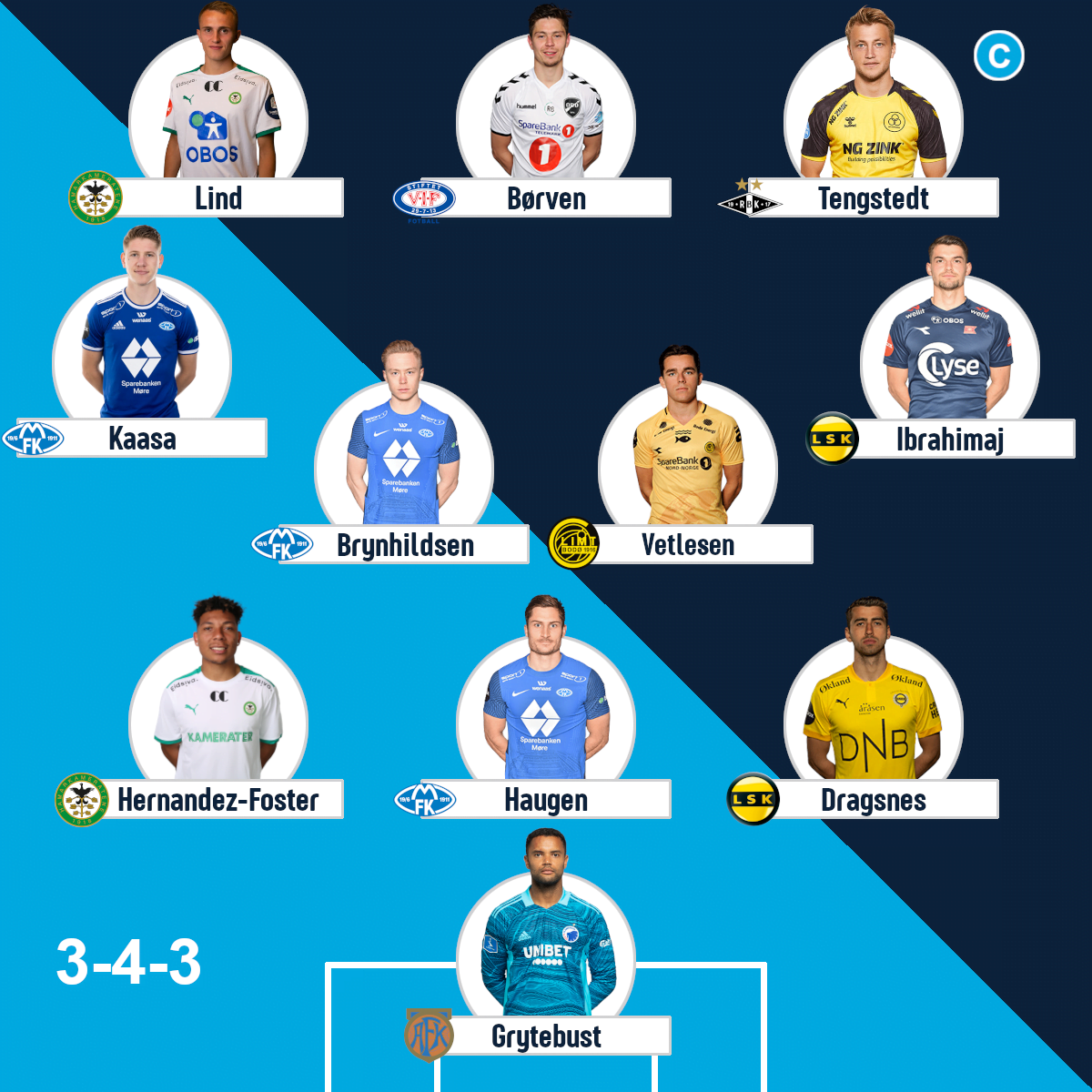