A slew of new names feature in our differential picks as we look at differentials that could boost your rank before a possible wildcard in the winter break. These are our Bundesliga Fantasy Differential Picks for Matchday 12:

Robin Quaison Vs Hertha BSC (A)

Mainz head coach Lichte is unhappy with Mateta’s form to the point where his starting spot might be on the line. This is a call for his partner up-top Quaison to step up as Mainz will look to gain six points over the next two games against Hertha and Werder Bremen. Quaison might be one of the more inconsistent players in the league but he tends to flip a switch against both the aforementioned teams. In his five games against Hertha and four against Bremen, he has scored six goals against both teams. The most interesting fact though is that he scored an away hattrick against both these teams last season.

Youssoufa Moukoko Vs Werder Bremen (A)

Not often do we see players as talented as Moukoko at 16 years of age but his youth number validate all the hype around the youngest player in Bundesliga history. He has 141 goals in just 88 youth games and is new Dortmund manager Edin Terzic’s choice to replace the injured Erling Haaland. Moukoko is yet to find his feet in the Bundesliga and he definitely has the right credentials to be a big goal-scorer.

Nadiem Amiri Vs FC Koln (A)

All the focus has been on the cheaper/more value-for-money Florian Wirtz so you will rarely hear Amiri’s name pop up as an option for a premium midfielder. In his last six games for Leverkusen, he has assisted four goals and scored one while averaging 12 points per game. His ownership percentage of 3% certainly does not justify the numbers of one of the best players on an unbeaten team that is currently at the top of the league.

A winger that is listed as a midfielder, Coulibaly has been highly impressive for Stuttgart and has scored goals against Bayern Munich and Borussia Dortmund this season. He is now seeing more consistent minutes after his good performances and offers an incredible value with an average of six points-per-game at just 1.1M. Which virtually makes him cost nothing.

Tobias Sippel Vs Eintracht Frankfurt (A)

He is essentially the backup keeper for Borussia and filling in for the injured Yann Sommer but he gives you the opportunity to own a keeper with an early kick-off at just 1M. 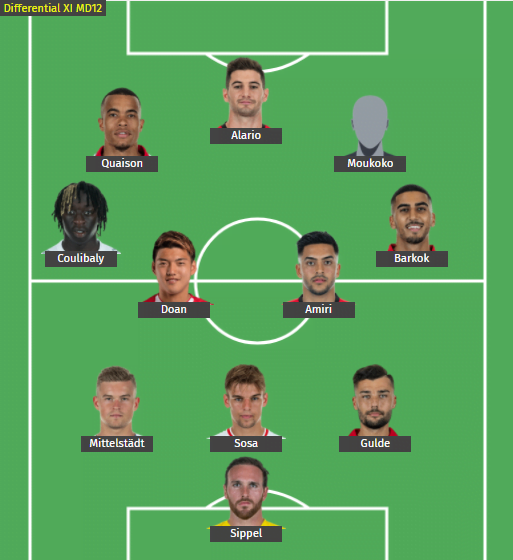