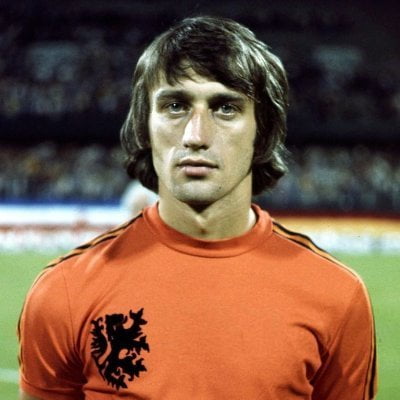 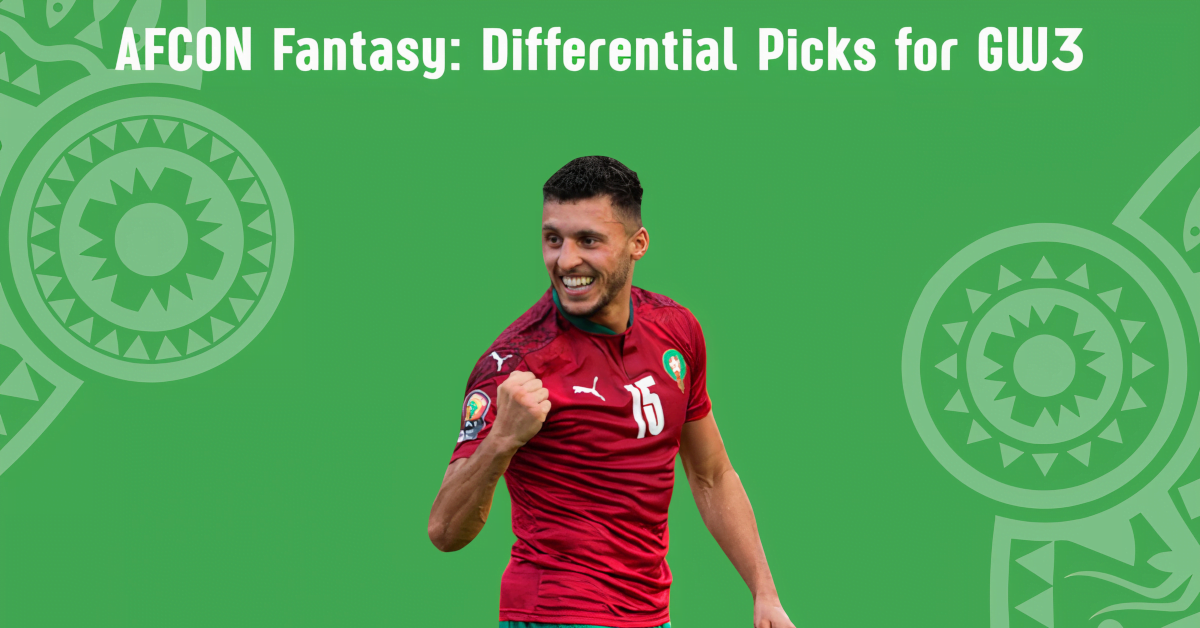 Current world #1 in AFCON Fantasy Robbie shares his favourite differential picks for the last gameweek of the AFCON group stages.

As we enter the last gameweek of the group stage, I have mapped out the scenarios of each team that want to qualify for the knockout stage. 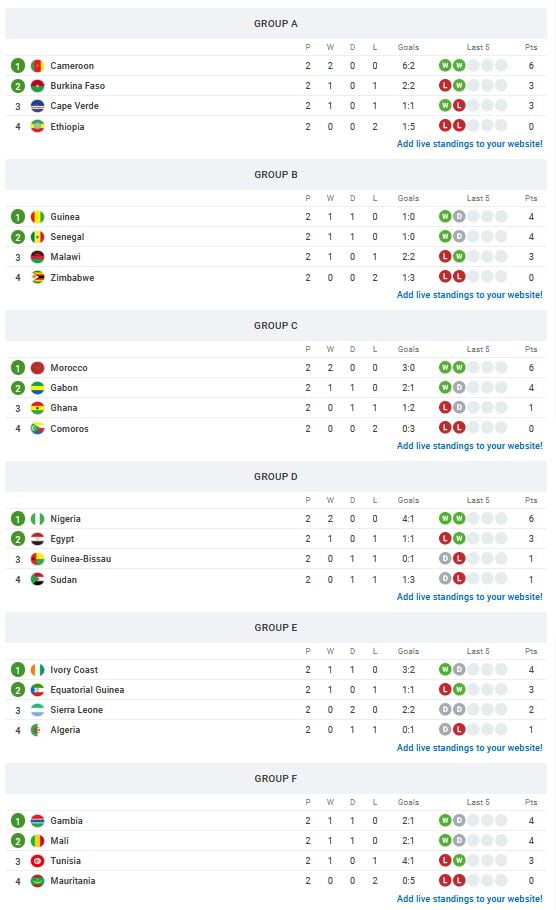 Nigeria have clinched the top spot in Group D because the current number two, Egypt, lost to them in the first game.

Zimbabwe and Mauritania have been eliminated from the tournament.

This is the rule concerning tiebreakers in the tournament:

Teams are ranked according to points (three points for a win, one point for a draw, zero points for a loss). If tied on points, the following tiebreaking criteria are applied, in the order given, to determine the rankings (Regulations Article 74):

Based on the scenarios, eye test, and matchups, I have listed these teams as teams I want to prioritize to target for GW 3:

– Burkina Faso, facing Ethiopia, will want to win to secure 2nd place in group A.

– Senegal, facing Malawi, will want to win with a good goal difference for a chance to win group B.

– Guinea, in group B, against the already eliminated Zimbabwe, are in the same situation as Senegal.

– Ghana, facing Comoros, in survival mode in group C, must win with a good goal difference for a chance to become 2nd.

– Guinea-Bissau, facing Nigeria that have already clinched the top spot in Group D, have to win to have a chance to become 2nd.

– Mali, against the already eliminated Mauritania, must win with a good goal difference to win group F.

This doesn’t mean you must not target players from other teams, but I personally want to prioritize these teams as much as I can, and if you aren’t using your wildcard in GW3, it is wise to keep the players who have done well in the first two games. Don’t take too many hits to guess lineups which can be heavily rotated for some teams. Each team has a different strategy and approach entering GW3, depending on the thinking of their head coach.

This time, I will try to make some differential picks, which will be more difficult to predict than in GW1 and GW2, with players owned in less than 10% of teams, and I will give you an option for another player in that position. To make it more interesting, these picks won’t be the same ones that I’ve made for GW2.

FYI, I still think my recommendations for GW2 can have a good GW3:  Okoye, A. Diallo, Khazri, and I. Koné – AFCON Fantasy: Differential Picks for Gameweek 2.

The 35-year-old Swedish-born goalkeeper has played all his career in Sweden. He opted to represent his father’s country of origin, Guinea, and made his debut in 2018, where he has played 18 times in goal.

Wollacott currently plays for EFL League Two side Swindon Town. He made his debut for Ghana in October last year, and since that debut has played all games for Ghana (six caps). The Black Stars will go up against a Comoros team that hasn’t scored a goal in this tournament so far, with M’Changama, the player who has the highest xG of 0.32 in two games. Wollacott has conceded two goals on five shots on target faced and 1.69 xGoTC this tournament.

The 32-year-old Crystal Palace player can play as a central midfielder or centre-back. He is listed as a defender on Realfevr but has played as a midfielder in the first two games of the tournament, with the advantage of higher probability to send key passes (one so far) while battling in the midfield for duels won (11 so far with eight in the last game) and CBI (Clearance, Block and Interception – total seven so far).

Kouyaté is very active in the duels (team-high three tackles and four interceptions, third in team for ball recoveries with 10) and is involved in the buildup to the attack for Senegal (fourth in the team for passes with 75, with one chance created). While the Senegal goalkeeper has only faced three shots on target with 0.8 xGoTC.

Senegal, needing a win with a good goal difference for a chance to win group B, are facing Malawi in the last game. Malawi blanked in the first game against Guinea and scored twice against Zimbabwe.

Traoré plays in Ligue 1 club Rennes, where he is the captain, as he also is for the Mali national team. The right-back is part of a very solid Malian defense that held a CS last year during the World Cup qualifications.

Mali have so far conceded only one goal and that was from the penalty spot against Gambia. In those two games, Traoré accumulated three KP’s, four DW’s, and nine CBI’s, and was very involved in building the attack for Mali. Traoré already has two CC, leading the team with 0.37 xA and second in passes with 81. Mali keeper Mounkoro has only faced two shots on target with 0.4 xGoTC. Traoré has also been involved in eight sequences that ended with a shot, a team-high. 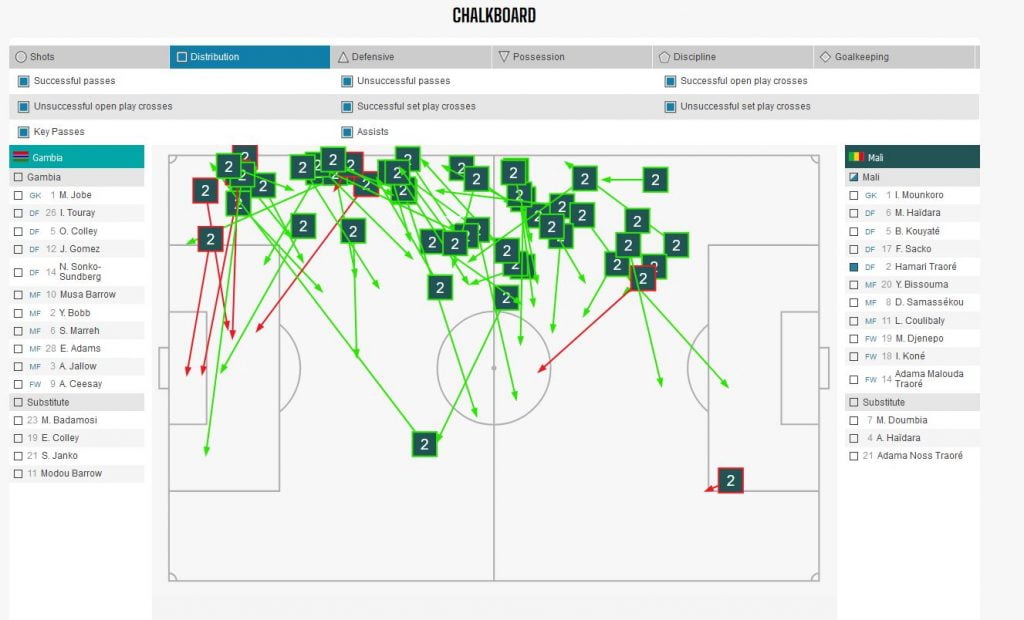 Mali will play against the already eliminated Mauritania and must win with a good goal difference to win group F.

The Burkina Faso captain missed the second game because he tested positive for Covid-19 but is now back and ready to play in the third match. The Chelsea academy product was loaned out twice to Dutch clubs Vitesse and Ajax and, after a successful stint in Ligue 1 with Lyon, is now playing for Aston Villa.

He was very active in the first match against host Cameroon, with one assist (one KP), two SoT’s, two CBI’s, and won six duels. In my opinion, he is the big boss of the team and will take penalties too.

Burkina Faso will face Ethiopia in the last match and will want to win to secure second place in group A.

Amallah currently plays for Standard Liège in the Belgian First Division A. He made his debut for Morocco in 2019 and has 14 caps with four goals for the national team. He played a big part in his team’s 2-0 win from Comoros last week with a goal and an assist. He has the most passes amongst the Moroccan midfielders and forwards with 73, and nine times he was involved in sequences that ended in a shot, with two ending up in the back of the net.

Morocco will face Gabon in the last match of the group stage. With Morocco only needing a draw, there is a slight chance of rotation.

The French-born 23-year-old has been connected to West Ham, Brighton, and Southampton these past few months. Playing for Clermont Foot 63, Bayo has taken Ligue 1 by storm with nine goals and two assists in 17 games. He made his debut with the national team in March 2021 and has played nine times for Guinea, scoring three times.

Bayo has been unlucky in the first two games of the tournament, facing tough defense of Malawi and Senegal. Which could also mean for him and the whole Guinea team, that they’re due. Bayo is still to get a shot on target (two shots) but looked more lively against Senegal than in the match against Malawi, with one KP and nine DW’s. He was involved in the sequence that led to Guinea’s only goal in the tournament and could be a good differential in AFCON Fantasy.

Guinea will play the already eliminated Zimbabwe and will look to win with a good goal difference for a chance to win group B.

Another option from Guinea: José Kanté (€5.0M, 3%, 5 points – 5.0 ppg) – he missed the second game because of Covid, so you might want to check again before the deadline.

Iván Salvador Edú is known in Spain as Iban Salvador and in Africa as Iban Edú. He currently plays for Segunda División club CF Fuenlabrada. He made his debut for Equatorial Guinea in January 2015 and has played 30 times for his national team.

He already has nine points from two games despite not having scored a goal or any assist, nor a shot on target (three shots). Salvador has amassed five KP’s, 13 DW’s, and four CBI’s. His 0.52 xG leads the team, second in the team with three chances created (CC), and has been involved in a team-high seven sequences that led to a shot.

In the last match, Equatorial Guinea will face Sierra Leone, a team that has drawn twice, 0-0 with Algeria and 2-2 with Côte d’Ivoire. While they are already advancing to the second round, they will want to win to secure a better position in the group which means not playing the stronger teams.
Honorable mentions:
Punt:

Well, that’s it from me. If you are on a wildcard, the names above can certainly be one of your preferred choices. If not, you can target one or two or even three of the names mentioned. Once again, the last games of the group stage are always tougher to predict. Some players you think will play may get rotated, while some players you think who will be rotated/rested might play.
AFCON Fantasy wildcarders have a difficult task in predicting which players might play. So difficult that the easiest way might be to get as many Cameroon or Burkina Faso players as you will hear or see some leaked lineups before the deadline. Non-wildcarders, hold tight, be patient and economical with your transfers. Target the Cameroon, and Burkina Faso game might be the way too, to be sure. Don’t forget to check first on the RealFevr website about the players’ ownership percentage. Getting the high EO players might strike you hard in the end. I hope you have a great gameweek 3!